It has always been my dream to fly cross country on a paraglider. On the 17th May, 2007, I flew cross country for my first time ever. It was a wonderful feeling. We met with one of the top local pilots, Semih Sayir, who was a competition pilot. Semih had amassed over 7,000 hours on a paraglider, he was calm and had vast knowledge of the local area. He was the perfect guide for the day. Semih and his driver took us inland to a take off on a dusty track at Geyran near Uzumlu. The peak in the far distance under the cumulus cloud was near to where we flew to… 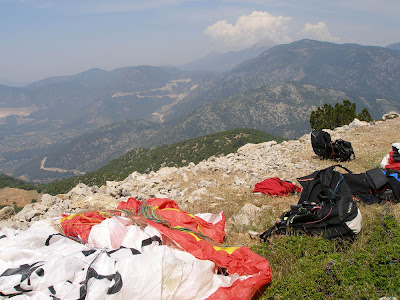 There were nine pilots and we all took off one after the other. We flew left where we thermalled to the summit of the mountain and before long we were all circling together in strong lift. Semih came on the radio, “ok, lets go… follow me!” So we did and glided off together. It was wonderful to fly in a gaggle because it is easier to spot where the lift is. This was not a competition but just friends flying for fun together. 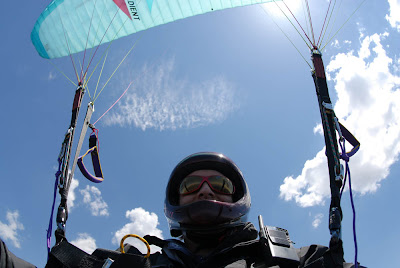 We reached the next hill along the valley where we found more lift and circled up again. Some of the gliders had more height so they went on futher but it took me and 3 others more time to get sufficient height to continue. After much work I had enough height to continue up the valley where I was flying low above the pine trees and rocky ridges. It was exciting and once again, I found lift and was now travelling at a safe height above the forest. I was locked into my own little world – my mouth was dry – I was determined not to be the first one to ‘bomb’ out. I had caught up with the others who had been waiting. Big Pete was with me and Dave was not far away a little lower down. 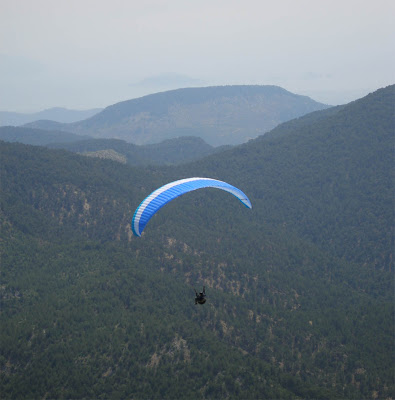 We followed the road up the valley. Some gliders were in sink and I soon found myself going down. I pushed out to the middle of the valley, following Pete, desperately hoping to be sucked back up. My vario told me that I was going up… I quickly put some 360’s in and found myself in the same thermal as big Pete. It was pure delight. 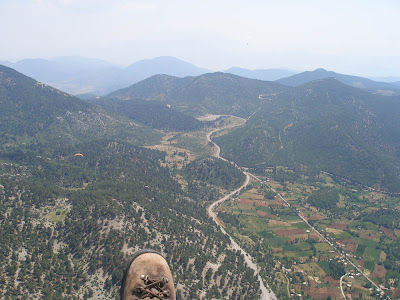 We climbed up to Semih and Mehmet. Another Aussie pilot was also up there called Phil from Zermatt. All five of us continued to the next waypoint where the lift was very strong. The clouds were huge and over developed – we decided to turn around to go back the way we had come. Dave had been the first to bomb out in a small clearing amongst the trees below – we could see his yellow glider below us. He got on the radio to let us know he was all right. 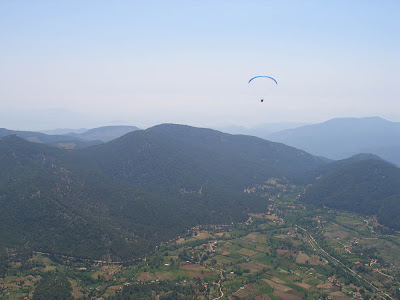 We were near the town Arpacik and we were low now too. We had been going 2hrs and 27mins. We had travelled about 30kms. Pete landed before me but his glider ended up in a tree which took ages to get out! The farmer came to help us. He spoke no English but was all smiles! I had a huge smile on my face as this is what paragliding is about. It was an awesome day. Who knows how much further we would have flown if the weather had not stopped us!! 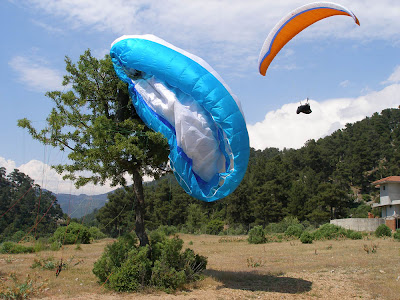 The following day, my wife, Diana, and I went into Fethiye to look around the market in the old town near the harbour. We found a local tailor who copied one of Di’s dresses for a few lira! Whilst he was at it he mended my glider sack and Di packed me off to one of the many barber shops where I was given full shave finished off with lashings of lemon cologne! Mmmm smells good! 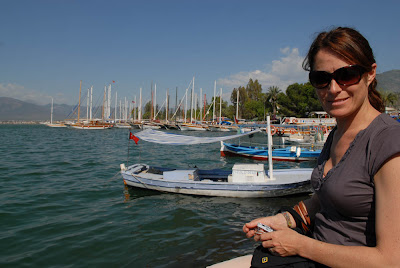