We have just spent the weekend up in Hathersage in the Peak District. Ben and Mum came up with us and we stayed at Carrhead Farm. It was Ben’s birthday on the 12th August and on Saturday we had some glorious flying at Eyam Edge next to Great Hucklow Gliding Club (where Dad took us back in 1980 to go gliding!) Ben and I flew for an hour or so together before landing for a drink at the pub. Some flew to Stanage and beyond. Another top weekend! Ben is on the red APCO on the right and I am on my trusty blue Gradient (Topas). Diana took the photo! 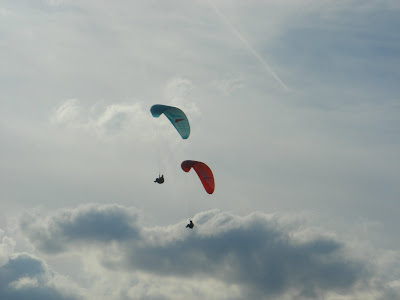