The forecast promised us sunshine and light East North Easterly winds and so Ben and I got up at 6.30am and drove to Pandy in South Wales. It turned out to be cloudy and overcast! We wondered if it would prove to be a wasted trip! When we arrived, we met another pilot called Robert. He showed us where to park just down from the farm in a field. We were the second car to arrive. We then took our gliders up to the high take off and took off just past the trig point. Ben took off after me and we flew 6kms down the ridge to the quarry. It was delightful. The mist was still in the valleys and we had the entire ridge to ourselves. Robert and Ben were the only other two gliders in the air at this time. We flew for over an hour before heading back to the trig point. 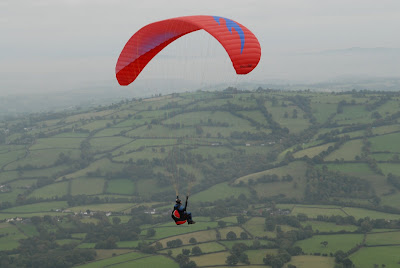 We lost considerable height coming round the corner to the trig point and were forced to land in the bottom field. It was a tiring walk back up and by the time we reached the top, the sky had darkened and was full of gliders. 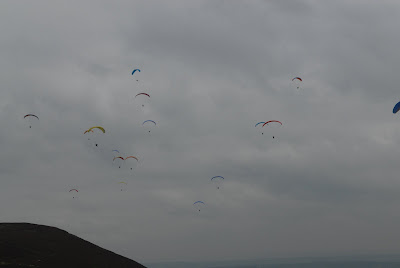 We had a number of other flights and left having well and truely had our fix!! Next time we shall return in the sunshine and hope to make it all the way to Hay Bluff at the end of the ridge (another 6kms down the ridge). 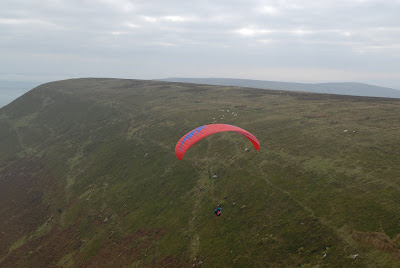 I took my Nikon D200 up with me with a large lens. It was interesting hanging out of my harness trying to get the best shots of Ben on his red APCO Karma glider. It was a shame that the skies were not a deep blue!